Can you tell us a little bit about yourself?

We are Dorry Macaualy and Miriam Baines, two sisters and parents. We help run ‘SOS from the Kids’; a group of children who love singing and want to protect nature. SOS from the Kids write and sing songs as a form of climate activism, they were recently featured on Britain’s Got Talent and got to the semi-final. We help write the songs, alongside the kids, particularly Dorry’s son Sim. We also help make the videos and sort out day to day admin and practicalities.

What made you start your blog?

‘SOS from the Kids’ started as a song that was written after Dorry’s children Sim (12) and Noah (14) learnt about humankind’s destruction of nature at school. The brothers came home telling their mum about the number of trees cut down per day, the state of the insects and the amount of energy and resources that are consumed to make a t-shirt. Watching David Attenborough’s ‘Climate Change – The Facts’ alerted them to the crisis this destruction was causing.

Dorry started writing a song about this realisation she was seeing in her children. Sim immediately took interest. He asked to sing it, but it didn’t have proper words yet so he started suggesting lyrics and re-phrasing words to make them ‘how he would say them’.

The song started as a way to channel their family’s feelings of despondency into something proactive, something that had hope and that other people could join them in.

What are your thoughts on Climate Change?

It is the biggest existential threat we face. As Sir David Attenborough says it could lead to the collapse of civilisations and the extinction of “much of the natural world”. We believe talking about climate change is a key to fighting it. The more that people talk about it in everyday life, social media and on news outlets the more that the issue will be faced rather than ignored.

Have you changed much about your lifestyle?

Changes have come as our mindset has changed. We have changed what we eat, we don’t eat meat and have dairy alternatives such as oat milk. We’ve managed to get a second hand electric car! We don’t fly and we don’t buy fast fashion. In general we try and support companies which are making sustainable and more planet friendly products. However, we know on its own this is not enough, we need big policy changes to be made by politicians and business. This is why we sign petitions and use music as a form of activism. SOS from the Kids especially like to perform to politicians and those with the power to make decisions for a greener future. We believe real change comes through the heart. Music appeals to the heart and the emotions. We want to appeal to people’s hearts and find shared values, such as we want a good future for our children.

What sort of reactions do you get from people who come across this?

When SOS from the Kids have performed to politicians they have mostly had very positive responses. At times politicians have welled up or been quite emotional at the sight of a choir of children asking them to ‘change the story’ and ‘stop hurting our planet’. Other times people have reacted in a defensive way, as if the children are accusing them and pointing a finger. However, the children are simply raising the issue and asking that everyone faces the science and supports sustainable solutions

What changes have you found the hardest to make and what have you done to overcome them?

Diet can be a hard one when you have young children particularly. We don’t want to force our diet choices onto them and for them to ever feel resentful. We overcome this by simply talking about the subject. An example is palm oil. By talking about it’s production and what it is really doing to the planet, particularly Amazon rainforest and the animals that live there we found that our children made their own decisions to avoid foods that contained it. Awareness makes such a difference.

What is your biggest fear about the future?

That our society in general is so distracted that we fail to really recognise the threat of climate change and therefore fail to act with the sufficient boldness required.

Who is your biggest inspiration?

Sir David Attenborough. At 93 he uses his time, energy and status trying to do all he can to protect future generations. He dares to raise the alarm and tell the inconvenient truth. That is incredible.

What is the one thing you would like people to take away from this?

When children express anxiety about climate change it’s easy to feel so overwhelmed oneself that their fears get pushed aside or shoved under the carpet as it can be hard to know what to say or how to help. However, there is lots of advice available for how to keep talking to children about it. If you are creative try using the arts to help them express their feelings. That’s how SOS from the Kids began, it’s taught us a lot about the power of the arts.

Do you have any advice for Appletree and Avalon?

No, we love what you do!

Wow. This is so inspirational & heartfelt. I cried when I watched this performance on BGT. It’s a strong message to get across but i would be surprised to hear if someone didn’t feel something & want to help support the future after seeing the passion from these Children & their parents.

We whole heartedly support these guys & girls. Keep going everyone!! We’re behind you! 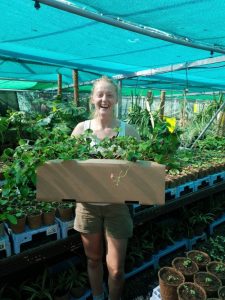 I’ve made it very clear on my social media how important this planet is. The sea, the land and everything in between.  The climate crisis saddens me no end.  It hurts me that we as humans have caused irreparable damage to the earth that serves us so well. I think there are many topics within the climate crisis that need to be discussed and more and more people need to make changes to their habits in order to help the planet recover. That is one of the main reasons why my journal is trying to bring more topics to the surface for people to educate themselves and ultimately make those changes. 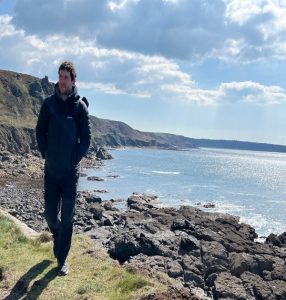 During the second COVID lockdown at the beginning of 2021 I was reflecting on my personal impact on the world. I’ve always imagined myself to be fairly eco conscious. Growing up I’d spent a lot of time outside in the great outdoors and had spent time at eco festivals with my family. However, one day I was thinking that during these periods of lockdowns I had personally saved a lot of money from not having to commute to work each day. This triggered a domino effect, everything I looked at around the house got me thinking, ‘is that the best I can do?’, ‘Where else can I save money’. This mindset quickly changed to how can I help save the planet! 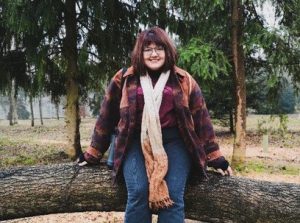 Hey! I’m Loz and I’m a 20-something creator and writer specialising in sustainability and wellbeing. I’m also the founder of Positively Loz; a platform dedicated to teaching you how to look after yourself and the planet. A total creative at heart, I love to write and paint – I even have a degree in Illustration! I am also incredibly passionate about nature and wildlife. You will find me spending my weekends in my wellies, bird-watching and exploring local wild areas around me!